From $1.865 in early August, KuCoin Shares saw a stunning fall as the market stays under bearish control. As of now, KCS is changing hands at $1.36 after seeing an overall price reduction of about 2.2% over the past few hours. Against Bitcoin, the token's price has dropped and has at the same time following a bearish sentiment on a long-term outlook.

As the bears take control of the market, we may continue to experience a fall in price until the sellers become weak. But for now, the selling pressure is still dominant as the next key support to watch out for lies at $1.3, $1.2 and $1.1 on the downside.

In the opposite direction, the price of KCS may reverse back to $1.5, $1.7 and $1.865 resistance areas if the market can find support on the triangle’s lower boundary. But as it appeared on the daily chart, the price is likely to witness a more fall.

The MACD indicator is now revealed in a downward range, following the past weeks of price drop – The indicator is likely to turn positive if the bulls can regroup. On the stochastic RSI, the market is revealed in the extremely oversold territory. 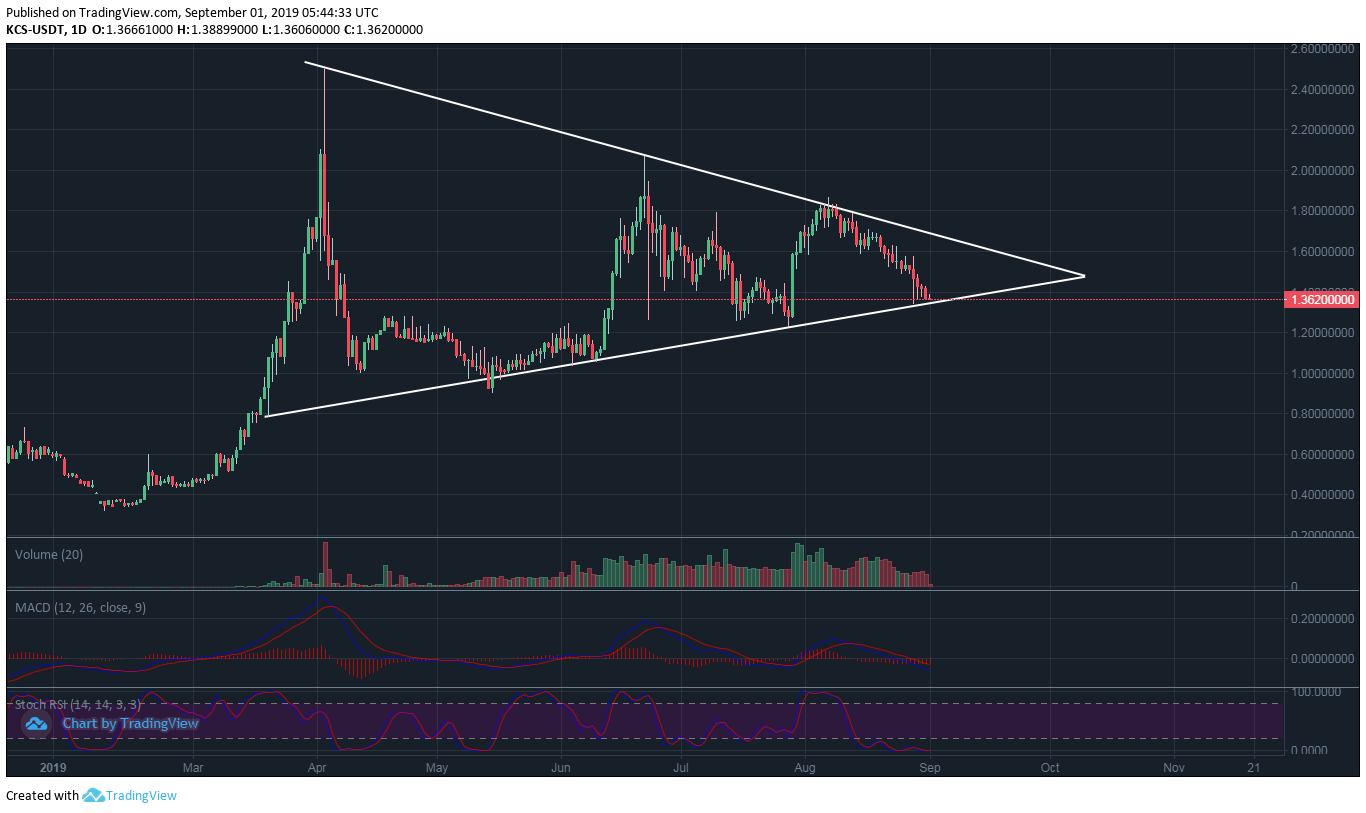 On the 4-hour time frame, Kucoin Shares continues to remain in a downtrend with a strong bearish bias over the past few weeks. As we can see, the token is still looking for support, although the price is now approaching the lower boundary of the channel.

Kucoin may continue its rollercoaster move as long as the sellers remain in the market. The closest support lies at $1.34, $1.3, $1.25 and below. Alternatively, a positive move might bring the market back to $1.4, $1.45, $1.5 resistance and above, allowing the buyers to regain control of the market.

The KCS market is at the extreme lowest condition on the important MACD, which shows that the bearish trend is still in a continuation. From the Stochastic RSI, the price of KCS is undervalued at the moment. We can expect a rise back shortly once a bullish crossover signals. 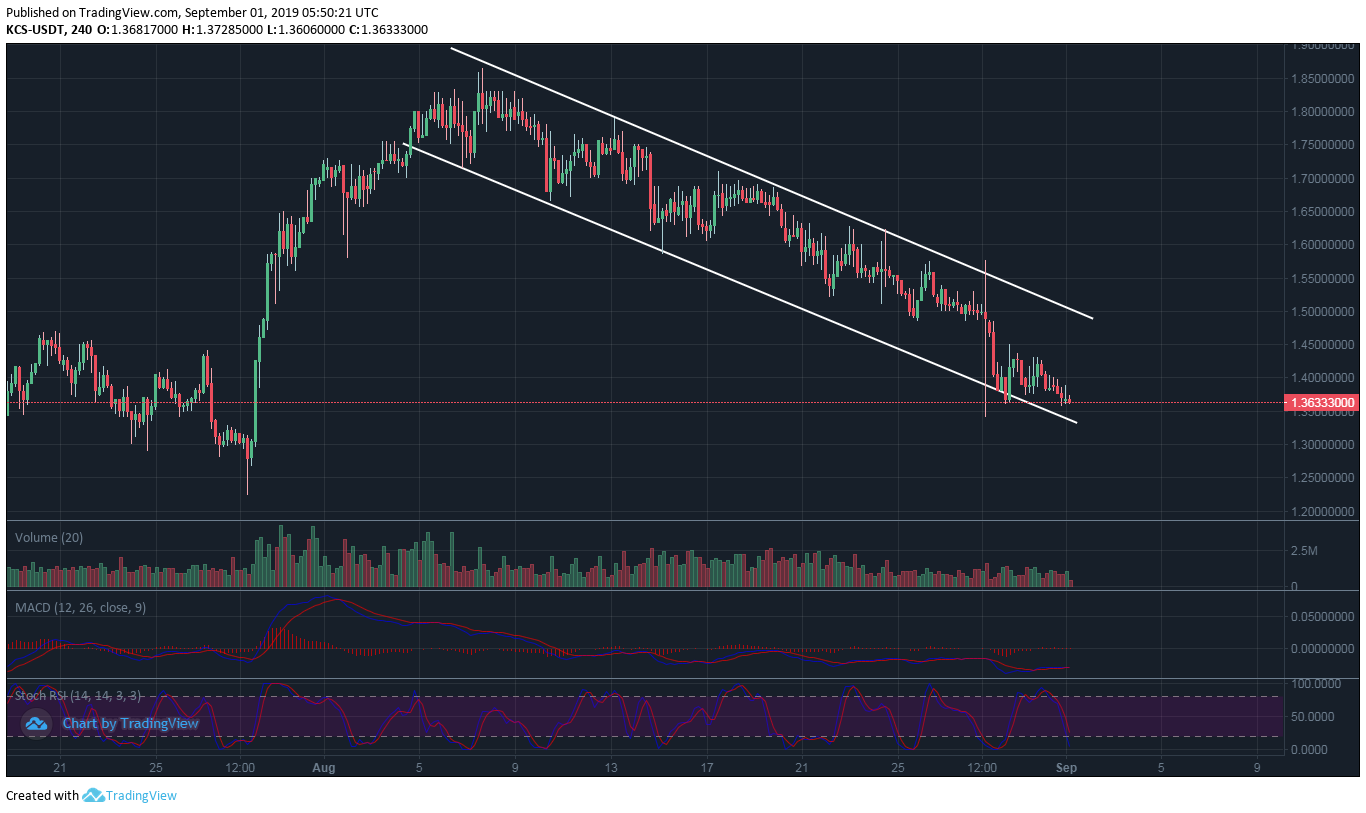 Following the August 28 rebound to $1.44, the KCS price is now following a bearish sentiment with a swing back towards the lower boundary of the wedge. As we can see on the hourly chart, Kucoin is preparing for another down surge. However, we need to see a clear break below $1.36.

Nevertheless, the KCS market is turning downward again after testing the upper limit of the Stochastic RSI. We can expect a rise back if buying pressure resurfaces. 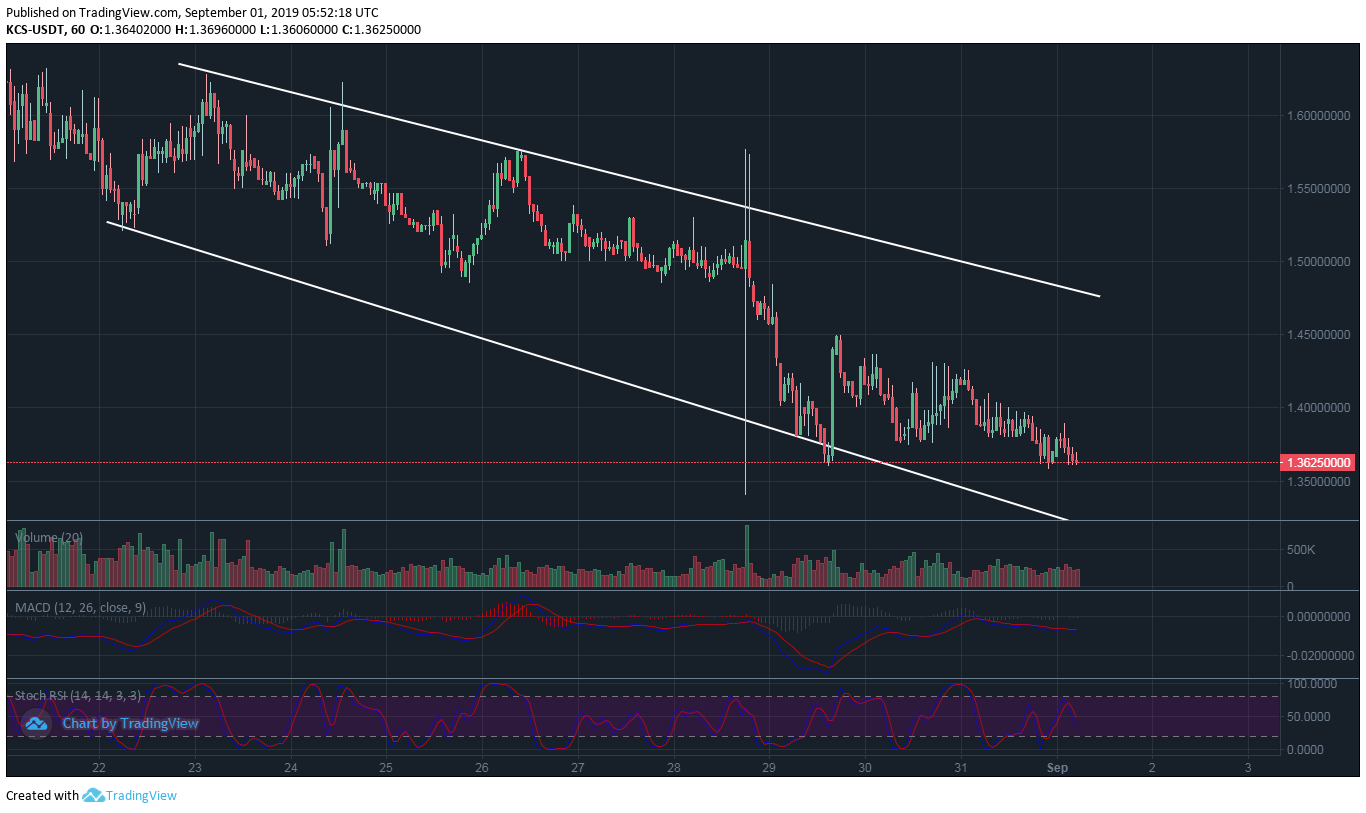