According to crypto analytics firm IntoTheBlock, 43 percent of ETH addresses are in profit with the Ethereum spot and derivatives markets seeing explosive growth in key metrics, making the second-largest crypto one of the top-10’s biggest showstoppers this year.

The first two months of 2020 have seen Ether rally nearly 110 percent against the dollar, with a $15 billion injection in market capitalization seeing the coin rapidly gain dominance in the broader crypto market. Spot trading volumes have spiked immensely in recent weeks during ETH’s months-long upsurge, prompting speculation the overall market is positioned for an extended rally.

ETH takes back ground against BTC

The coin has also exhibited a similar show of strength against Bitcoin since the start of the year. Having rallied 68 percent against the original cryptocurrency, ETH/BTC is in the midst of its biggest uptrend since December 2018.

ETH has not seen these levels of price or dominance since July last year—the point at which it collapsed into the start of a six-month bear market and tanked to taking one of its lowest shares of the crypto market ever.

Futures traders appear to be jumping in with conviction behind the coin’s uptrend—all ETH derivatives venues have seen steady hikes in open interest in recent months, with aggregated open interest closing in on the $1 billion mark, up roughly 100 percent since late January. 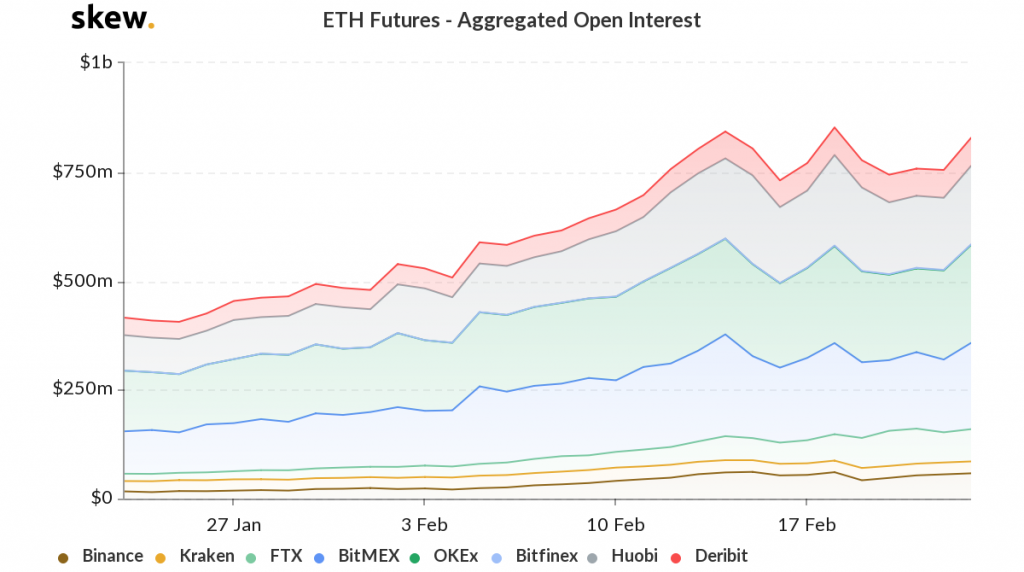 While in USD terms, Bitcoin has seen a larger increase of open interest, $2 billion, proportionately this is a lesser 66 percent gain in terms of the number of contracts being opened. The largely unregulated ETH futures market may not be the most reliable gauge of sentiment, however.

The Grayscale Ethereum Trust may be a more trustworthy indicator. Grayscale’s accredited and institution-only ETH trust has seen a 170 percent increase in assets under management since the start of the year compared to a 50 percent increase for the Bitcoin trust.

The post Near-majority of Ethereum holders in profit as Grayscale investors increasingly allocate to ETH appeared first on CryptoSlate.