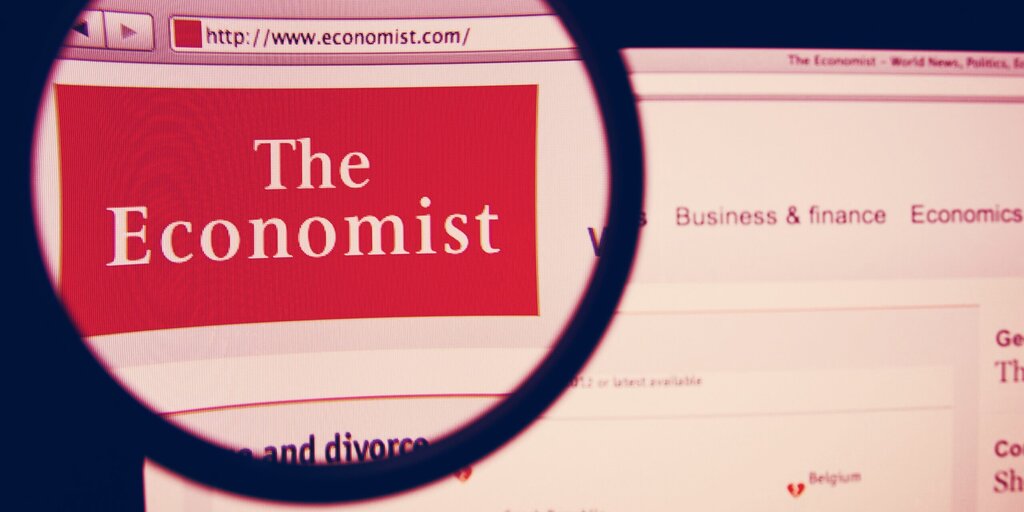 The Economist has advertised the controversial crypto project HEX, which has been widely derided by many in the cryptocurrency industry as an unregistered security and a possible pyramid scheme.

The Economist’s half-page ad, which claims that the price of the HEX token rose 11,500% in 129 days, was spotted in the US Edition of this week’s print issue, by Brad Michelson, US marketing manager at crypto exchange eToro.

Check out this HEX ad in @TheEconomist. Yikes...

Others subsequently posted images of HEX ads seen on London buses and black cabs, and even at an English Premier League soccer game.

HEX has been met with suspicion from many in the crypto community, who believe it’s just a get-rich-quick scheme for founder Richard Heart, for a variety of reasons.

HEX is designed to most reward those who acquire tokens early on, those who stake more for longer and those who refer others. This structure has led to allegations that it’s little more than a pyramid scheme.

The token’s distribution, as an airdrop to Bitcoin holders, created an instant user base of millions, and HEX is sold as a high-interest account where users must give up ownership of their funds.

But Heart’s claims that HEX will increase faster in value than any other token in history are perhaps the main reason many are skeptical. A similar claim was put forward by Carlos Matos, founder of Bitconnect, another cryptocurrency-promising, high-yield investment that saw a spectacular collapse.

The Economist’s decision to publish the HEX ad was met with disgust by Mati Greenspan, founder of analytics startup Quantum Economics, who said that he would be cancelling his subscription to the publication. And there was disbelief by popular crypto trader Scott Melker.

To remove any room for doubt, Nic Carter, co-founder of crypto data startup Coin Metrics, posted an image of his own copy of the Economist, confirming that the ad was not photoshopped. However, it’s not featured in the UK edition.

But HEX fans didn’t waste the opportunity to pile into the debate, and praise the project. They highlighted that HEX had undergone three audits, which they argue provides some credibility.

HEX now has a market cap of more than $1 billion—an increase of $500 million in two months.

It continues to be listed on more crypto exchanges, but not without some pushback. At the end of last year, former Bitcoin.com CEO Stefan Rust was forced to defend his decision to allow trading of HEX.

The project’s massive, mainstream advertising campaign is obviously designed to buy credibility, as well as investors.

With reputable publications such as The Economist now on board, DYOR—or “doing your own research”—is more vital than ever.