Ethereum Price Analysis - Ethereum Continues To Struggle Against Bitcoin But Can ₿0.020 Hold?

Ethereum has increased by 8.5% over the last week of trading as the cryptocurrency rises from the $105 level to reach the current price at around $145. It has made a couple of attempts to climb back above the resistance at $140, however, it has failed on each attempt and has now decided to head lower.

The cryptocurrency has ranged between $110 and $140 since the precipitous price decline witnessed in March 2020 when the entire cryptocurrency market crashed. This market crash was apparent throughout the entire economy as the stock markets and commodities across the globe tumbled all at the same time due to fear and uncertainty relating to the on-going Coronavirus pandemic.

The cryptocurrency has also been suffering pretty heavily against Bitcoin this month as it continues to create lower closes as each day passes. It closed beneath major support at ₿0.021 a few days ago and has continued to drop further lower over the past few days as it heads toward ₿0.020.

Interestingly, Vitalik Buterin, co-founder of Ethereum, recently Tweeted about his frustration regarding the fact that there are no trustless swaps available between the two largest cryptocurrencies, Bitcoin and Ethereum. Trustless swaps are decentralized methods of exchanging between these tokens without the need to trust a 3rd party centralized exchange to hold and securing funds. The swaps simply happen through on-chain between each user’s wallet during the transaction.

Buterin described the lack of trustless swaps as “embarrassing” and stated that more decentralized bridges need to be built.

How to buy Ethereum (ETH) on Binance 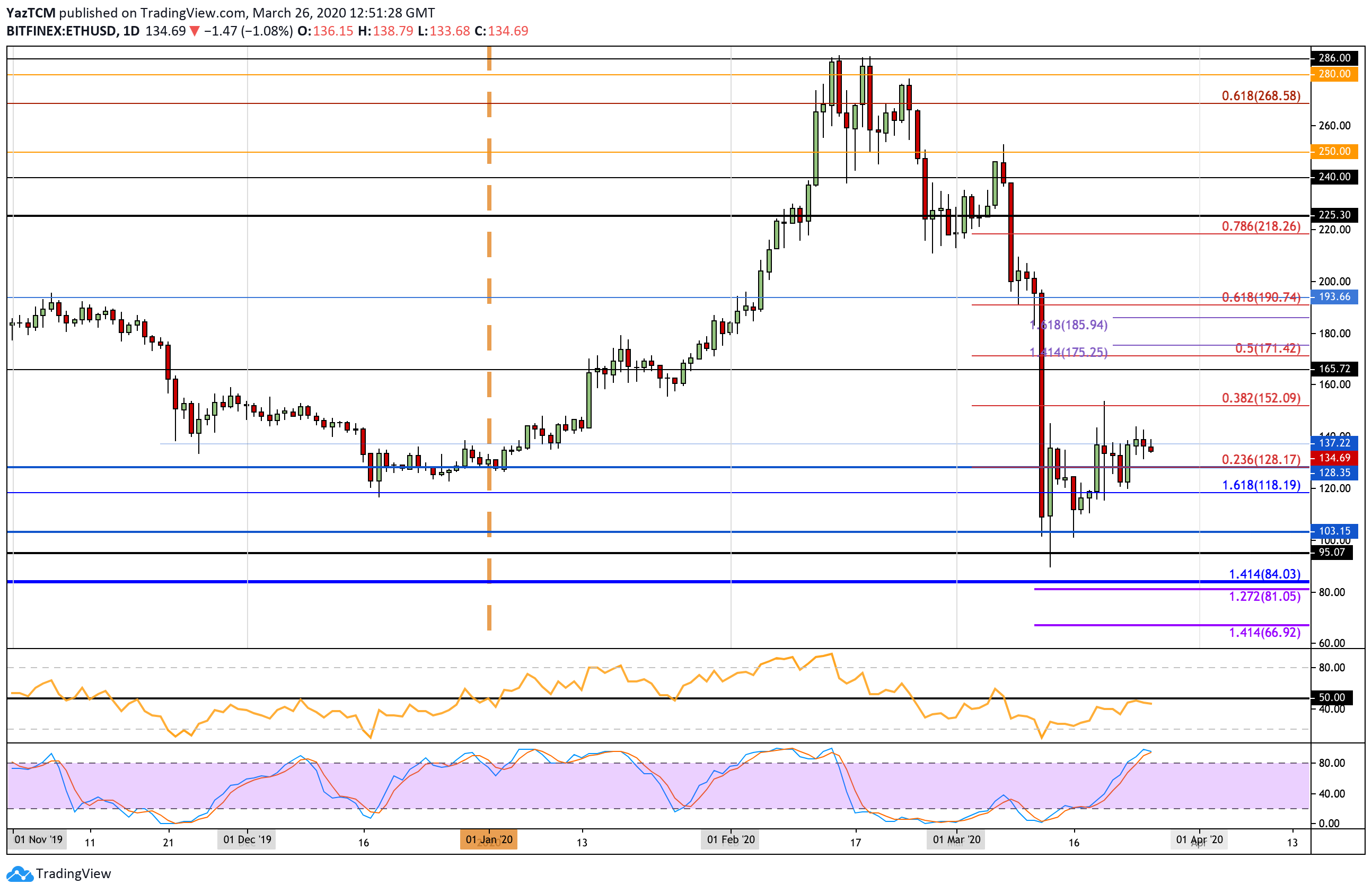 Taking a look at the daily chart above we can see that Ethereum has started to try and recover from the major capitulation seen earlier in the month. It managed to find strong support at around $110 and started to continue to climb higher from there.

It had met resistance at the $137 level a few times during the last week and only managed to slightly break above this resistance over the past few days. Unfortunately, it was unable to break above higher resistance at $140 which caused the cryptocurrency to drop lower again as it now trades at around $135.

Although it has seen some good positive price action over the past couple of weeks, Etheruem still has to remain bearish. A break and close above $140 would turn the market into a neutral condition but until then we cannot ignore the major capitulation candle seen in March.

Where is the resistance towards the upside?

On the other hand, if the bulls can break the current levels of resistance at $137 and $140 we can expect the next level of strong resistance to be located at $152. The resistance here is provided by a bearish .382 Fibonacci Retracement level that is measured from the March high to the March low.

What are the technical indicators showing?

The RSI has been rising to show that the previous selling momentum has started to fade. However, it has now reached the 50 level and turned back lower from here to show that the bulls are still not strong enough to take over the market momentum.

Additionally, the Stochastic RSI is primed to produce a bearish crossover signal that will send the market lower. 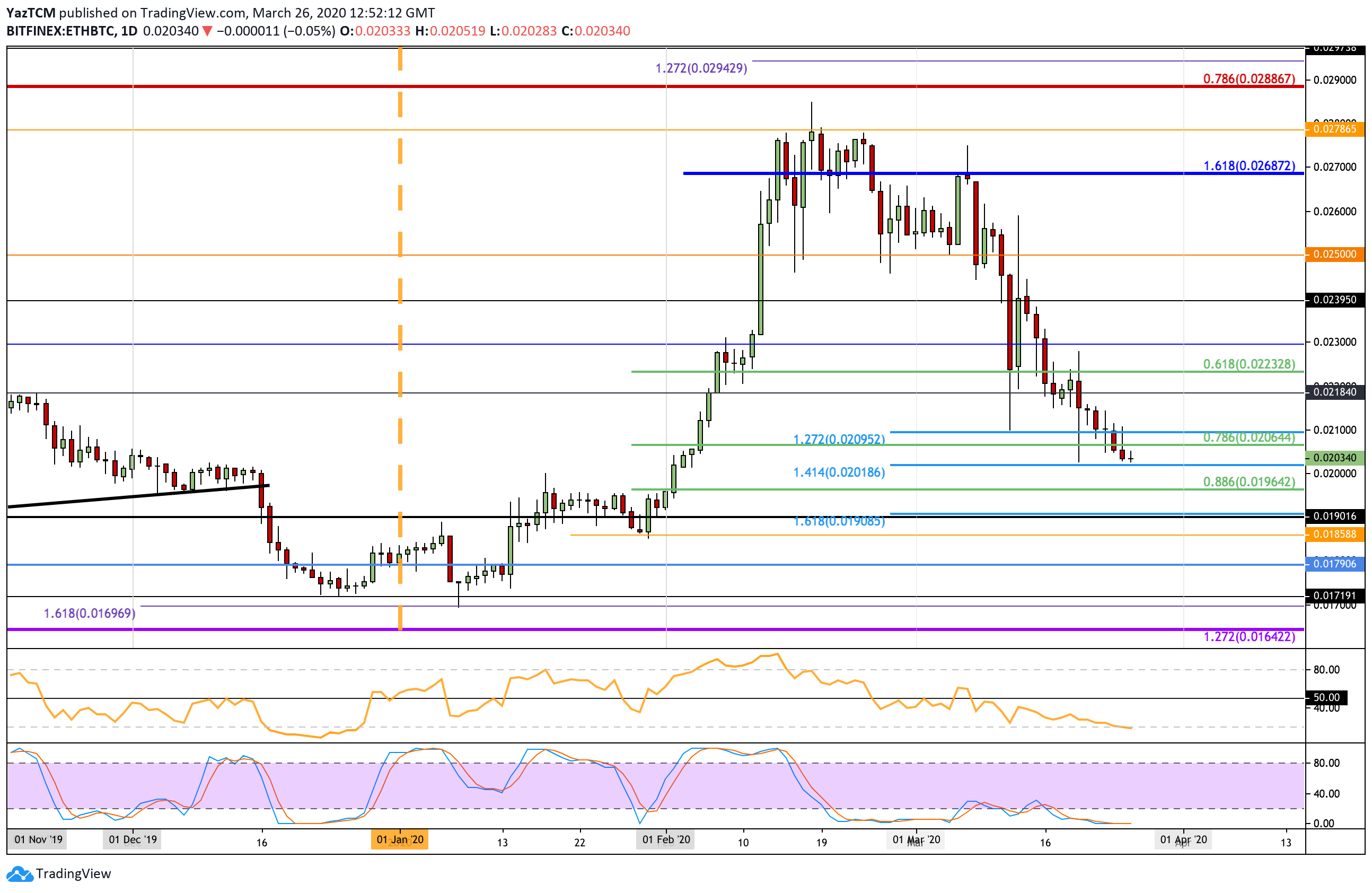 Ethereum is now considered to be bearish against Bitcoin after the break beneath ₿0.021.

If the sellers continue to push lower, we can expect support to be located at ₿0.0201 (downside 1.414 Fibonacci Extension level) and ₿0.020.

Where is the resistance towards the upside?

At CoinCodex, we regularly publish price analysis articles focused on the top cryptocurrencies. Here's 3 of our most recent articles about the price of Ethereum: