If you have owned Bitcoin for a while, you would probably understand that cryptocurrency comes with inherent liquidity issues. Of course, you might have made millions of dollars worth of profits via your Bitcoin investments but realizing those gains in real money remains a daunting task. Therefore, in this article, we attempt to answer the internet’s most-searched question on cryptocurrencies: how to turn Bitcoin into cash?

But before we dig into the hows, let us understand a few basic things.

Bitcoin is the world’s first decentralized peer-to-peer payment network on the internet, with a native cryptocurrency of the same name serving as its digital money. People can use Bitcoin to transfer value across its decentralized network. Instead of banks, many computers confirm and add transactions to a public ledger called a blockchain.

The cryptocurrency comes with a limited supply cap of 21 million units. However, many speculators believe that Bitcoin’s scarcity makes it a valuable asset to hold against inflation caused by unlimited money printing by global central banks. In doing so, they equate Bitcoin with gold, a traditional safe-haven asset.

That has made Bitcoin an emerging hedging asset against macroeconomic turmoils. For instance, demand for cryptocurrency surged all across 2020 after the US Federal Reserve made lending cheaper by cutting interest rates and boosted quantitative easing by purchasing $120bn worth of government bonds and mortgage-backed securities every month.

Bitcoin rose from $3,858 to $65,000 against the Fed’s loose monetary policies. But, of course, those who purchased the cryptocurrency near its 2020 lows — or even before that — now sit atop massive gains.

Even if investors have turned into millionaires by investing in Bitcoin, all of their profits remain unrealized. They get to turn their paper gains into real ones only when they get to sell their Bitcoin holdings for real money, be it the US dollar, euro, pound, or yuan.

Part of the reason is Bitcoin’s limited use at the point of sale counters. Despite its merits, the cryptocurrency is too slow to be called a real currency. Each of its transactions takes at least 10 minutes to get confirmed. Moreover, its price remains wildly volatile. As a result, merchants cannot accept Bitcoin at risk of losing — say — 10% of the PoS value in less than 10 minutes.

For example, payment platform Stripe ended its Bitcoin payment support months after adding it, citing its slow transactions and volatility as the core reason. The firm also said that Bitcoin functions more like an asset than a currency.

That is why investors need to convert Bitcoin to cash time after time, to realize their actual profits and buy things with the proceeds.

In a way, exchanging Bitcoin for cash is the same as converting one fiat currency into another. One essentially sells their Bitcoin and receives an equal value in the US dollar or any other currency of choice.

The exchange rate while selling Bitcoin for cash does not depend on central banks or governments. Instead, it is determined by demand and supply. An exchange merely acts as a place to match orders between buyers and sellers. What the buyers are willing to pay for Bitcoins gets compared with what the sellers are asking. And that is how a Bitcoin sale is executed.

The Bitcoin seller receives the fiat amount into his wallet, which they later withdraw to their preferred bank card or account for a fee.

Things to Consider Before Cashing Out Bitcoin

Before you cash out Bitcoin, you should focus on the following drawbacks:

If you have made profits after selling your Bitcoin, you could be subjected to capital gains taxes based on local laws. Transacting through a reputed third-party exchange or service means that it would report your Bitcoin sales to the concerned authorities. So, be prepared to file your taxes if you want to avoid legal troubles.

Every Bitcoin purchase and selling service comes with its own set of fees. Meanwhile, they charge commissions while transferring Bitcoin sale proceeds to bank accounts. It is advisable to stay alert about how much you’re paying to have your Bitcoin converted to cash.

Third-party services typically take 3-5 days to transfer the converted Bitcoin to your bank account, depending on the jurisdiction.

Types of Cashing Out

There are multiple avenues available when it comes to cashing out your Bitcoin. But in general, they can be divided into two: peer-to-peer cryptocurrency exchanges and third-party brokerage services.

A peer-to-peer cryptocurrency platform typically requires buyers and sellers to connect over a classified portal for a potential crypto deal.

Traders put their ads on marketplaces, such as LocalBitcoins.com, Paxful, and others, to find buyers or sellers of cryptocurrencies. In doing so, they get to see multiple Ask and Bid rates for Bitcoin. As for sellers, they look for Bid rates of listed buyers and choose the best offer accordingly.

In doing so, sellers can negotiate with buyers directly on Bitcoin rates. Meanwhile, upon the deal is finalized, sellers can ask buyers to deposit cash directly into their bank accounts. In the meanwhile, since Bitcoin transactions are irreversible, it is always recommended to ask for the buyers’ identity proof before transferring the cryptocurrency to his wallet.

Nonetheless, the same risk-free settlement cannot be guaranteed in the case of unregulated brick-and-mortar exchanges. In it, a buyer is individually responsible for guaranteeing the safety of his/her Bitcoin funds. Since he might need to meet the buyer in person, he would need to assume the dangers of forcible Bitcoin transfers should the buyer turn out to be a thug.

One should also focus on the following issues involved in peer-to-peer Bitcoin sales.

Since cash-based transactions are offline, they could likely become a cesspool of money laundering activities. Therefore, please be advised that you sell Bitcoin for cash on the matter of convenience instead of evading taxes.

Offline exchanges might buy Bitcoin from you at a negative premium.

Key takeaways when one uses a peer-to-peer cryptocurrency platform to convert their Bitcoin to cash:

Selling Bitcoin via third-party services and moving proceeds to a banking account remains the most common and straightforward procedure.

Depending on where you live, you can find an exchange registered and regulated as per the local jurisdictions. In doing so, you will be able to protect your Bitcoin from a range of common issues exchanges face, mainly security-related, that lead to theft or wipeout of Bitcoin balances.

For instance, US-based Coinbase protects its users from the risks of thefts and other losses by insuring its crypto reserves. Meanwhile, traders can quickly sell their Bitcoin holdings on the exchange for a fee and withdraw their US dollar balances to their local bank account without breaking a sweat.

Similarly, Kraken is ideal for Bitcoin traders who have a euro-denominated bank account. Meanwhile, Binance and BitStamp look great for traders who want to make bulky fiat withdrawals following their crypto sales.

As for how to withdraw Bitcoin from a cryptocurrency exchange, the process is simple. At first, you need to keep Bitcoin that you intend to sell in the wallet allotted by the exchange. The trading platform would also provide you with a ‘withdraw’ option. Just click on it, select the total number of Bitcoin you want to withdraw, choose your preferred bank account where you would like to send the proceed to, and hit Enter.

The withdrawal will be paid to your bank account.

It is meanwhile important to know that most of the exchanges comply with global anti-money laundering laws. Therefore, they would definitely inspect your transaction for any potential discrepancy. Should they find one, they can certainly lock your funds until further clarification from your end.

Debit cards and Bitcoin ATM attempt to combine the best of crypto and traditional finance.

Just like traditional ATM kiosks, Bitcoin ATMs, are portals through which users can access financial services. The only difference is that traditional ATMs allow users to deposit and withdraw cash while Bitcoin ATMs enable them to buy and sell bitcoin for cash.

Typically, these Bitcoin ATMs are connected to cryptocurrency exchanges, not a bank account. You can find these kiosks using Coin ATM Radar. As for how to use Bitcoin ATM, a user must first verify his identity that can be done through a variety of different ways depending on the machine, using one-time passwords or Google Authenticator app.

Later, a user needs to decide whether he wants to sell or buy Bitcoin. To sell Bitcoin, the user sends Bitcoin from his wallet to the Bitcoin QR code presented on the ATM screen. Depending on the machine, some will dispense cash immediately, while others will take a bit of time.

Similarly, Bitcoin debit cards are connected to a wallet service that holds the users’ Bitcoin. So instead of cashing out Bitcoin, users can directly spend their cryptocurrency at point-of-sale.

Key points while using third-party services to cash out Bitcoin:

What Is Crypto Staking – How To Start 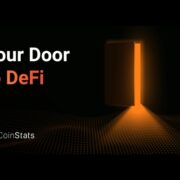 Say Hi to CoinStats Wallet: Your Door to DeFi How to Add Polygon to MetaMask [The Ultimate Guide 2022] How to Buy Universe.xyz [The Ultimate Guide 2022]