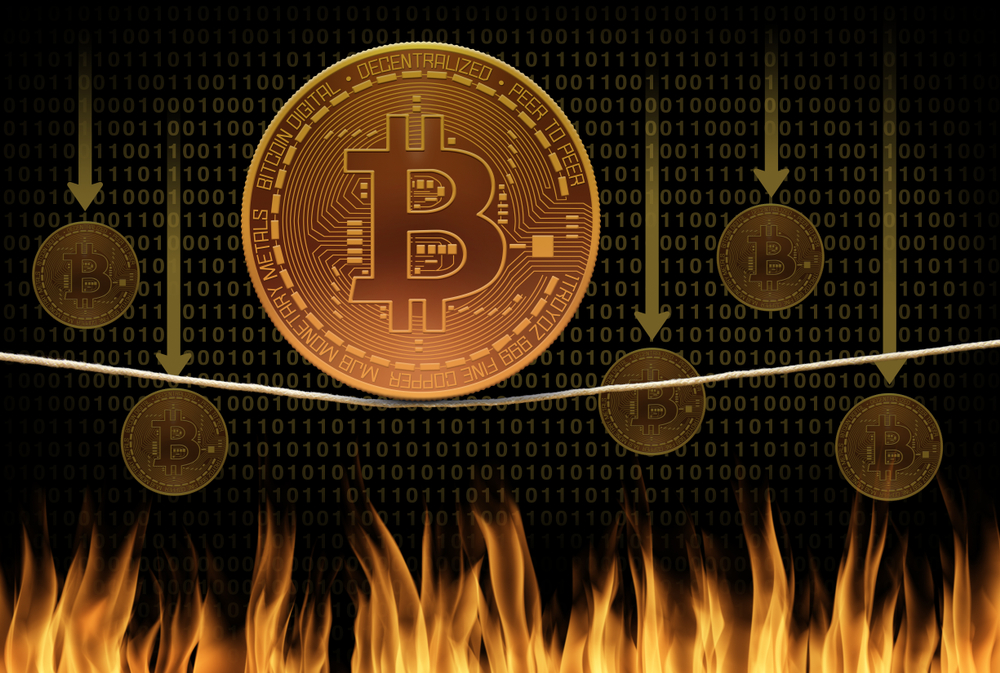 Predicting Bitcoin price is no less than looking into a crystal ball. As the cryptocurrency leaves behind a trail of endless bullish and bearish fractals, it gives traders a grain of data to predict its next trend.

The reality remains the same: the Satoshi Nakamoto’s p2p cryptocurrency is an erratic asset. Its market is tiny, which exposes it to price manipulation, higher volatility, and low liquidity. One can merely guess where bitcoin would move next, not guarantee it.

So can the cryptocurrency fall to $6,000? Maybe. There are ample of recent market data that points to an imminent breakdown. At the same time, conflict theories also see bitcoin surging to $20,000 by the end of this year.

But let’s leave Bitcoin’s upside bias for another day and focus on the risks it represents after rallying by more than 150 percent since March 2020.

In retrospect, the cryptocurrency’s price surged from below $4,000 to a little above $10,000 in less than three months. Before that, it had crashed by more than 60 percent in just two days. So one can see why bitcoin remains a hugely volatile and erratic investment asset that can go anywhere between zero and a million dollars.

Traders, nevertheless, anticipated the price rally to break roofs above $10,000. They had and still have plenty of reasons to support their bullish bias, which include global central banks’ open-ended monetary policies, hyperinflation worries, and increasing bids for safe-haven assets amid an ongoing economic crisis.

But despite every catalyst predicting a full-fledged bull run, bitcoin is struggling below $10,000. The cryptocurrency has repeatedly aborted its attempts to close above the said level. Even this week, it made one brief attempt at a breakout but fell short.

That brings us to a “crystal ball” price target of $6,000 – a level Bitcoin has tested both as support and resistance in the last three years. The cryptocurrency “could” fall towards it. And here are the reasons why.

Ever noted how bitcoin’s attempts to close above $10,000 gets ripped apart by massive short liquidations at BitMEX, a Seychelles-based crypto derivatives exchange.

In a derivative market, traders place overleveraged bets – long or short – on bitcoin’s price movements in the spot market. It’s more like a betting game. If one bets its 1 dollar and takes up a 100x leverage on a bullish position, he can open a contract worth $100. It is called the margin.

Gambling as it is, if the spot price moves in the direction of traders’ position, they take home 100 times profit out of just a dollar. Meanwhile, if they lose, they lose the entire margin of $100. They then need to pay BitMEX to keep the position open after the contract expires or accept the losses.

As of late, derivative traders forcible liquidate their short (bearish) positions when the spot bitcoin hits $10,000. It happened on Wednesday, causing a $15 million worth of Short liquidations in just 30 minutes. The same thing happened last week, liquidating about $133 million worth of downside contracts when price closed above $10,000.

BitMEX is a scary indicator. It played a crucial role in crashing the bitcoin price by 60 percent in March 2020. And its overleveraged trading could spell a bearish disaster, pushing prices down towards $6,000-support out of the blue.

The red bar in the chart below is the $6,000-support area. As one can notice, the range was instrumental in holding Bitcoin from extending its downside moves in 2018. Meanwhile, it also challenged bulls in 2019 for a while as they eventually broke the price towards $14,000.

The red-bar is not alone, anymore. It appears that it has got double-layered support in the 200-weekly moving average (the orange wave in the chart). The 200-WMA is sitting just near $6,000, as well.

If the BitMEX factor continues to play out, and spot traders fail to break above $10,000, bitcoin risks breaching a cascade of support levels to retest the red-bar-200-WMA combo. The orange wave is good at calling bitcoin’s bottoms, anyway.

The third and the final reason why bitcoin could drop to $6,000 deserves an introduction first.

Bitcoin and the U.S. benchmark S&P 500 crashed almost in sync in February and March. The fast-spreading coronavirus cases in the U.S. prompted the government to impose nationwide lockdown. That caused a market rout, sending every asset downwards but cash.

After the crash, the Federal Reserve intervened with an open-ended stimulus package worth $3 trillion. The U.S. central bank, meanwhile, slashed interest rates to near zero.

The stimulus also helped Bitcoin to register a remarkable recovery rally. Overall, a single common factor brought the price moves of Bitcoin and S&P 500 in sync.

But now the latter is looking to break lower.

The S&P pared its gains this week, accelerating downward as the Fed painted a gloomy outlook for the U.S. economy. The chairman Jerome Powell said that the job market may take years to recover from the coronavirus pandemic.

That further led bitcoin prices lower, proving that the cryptocurrency could face more downside moves as the global economy deteriorates. That again put the pressure on $6,000, among the only targets that can reverse the downtrend.

Is Pi Network a Scam or Legitimate Crypto Project?

Analysis: How Bitcoin Would Fare against a More Brutal US-China Trade War