Axie Infinity is a "play-to-earn" pet training game and a virtual world built on the Ethereum blockchain. Axie's inspired by Nintendo's beloved Pokémon series. Players can collect, breed, trade, and pit adorable monsters called Axies against each other in cartoonish combat. Vast investment is needed; however, you own your Axie NFTs and are rewarded with crypto tokens that can be exchanged for money.

All in-game assets are represented via fungible ERC-20 or non-fungible ERC-721 tokens and traded on secondary markets.

Check the current Axie Infinity Shards (AXS) real-time price, market cap, circulating supply, trading volume, historical statistics, etc., along with in-depth information on several of the biggest and fastest-growing cryptocurrencies on CoinStats, one of the best crypto platforms around.

Read on to learn everything you need to know about the Axie Infinity project and the AXS token.

What Is Axie Infinity

Axie Infinity is a leading blockchain game based on the Ethereum blockchain and inspired by the popular Pokémon games series.

Players can collect, raise, breed, battle, and trade token-based creatures called Axies within the Axie Infinity Universe. Each Axie is a unique NFT that can be bred to produce more Axies or traded through an in-game P2P Axie marketplace.

SLP is earned by playing Axie Infinity and can be used to breed new Axies, which can then be traded for AXS. Investors who don't want to play Axie Infinity can still buy and sell both tokens on decentralized crypto exchanges.

Axie Infinity has opened up aspects of the Axie universe to community developers, who can have a say in how the Axie Infinity game develops further.

It's fun to play and learn how blockchain technology works through Axie. As of October 2021, Axies are the most traded NFT collection in history.

Among the investors of Sky Mavis are leading venture capital Andreessen Horowitz, owner of Dallas Mavericks Mark Cuban, crypto derivatives exchange FTX and others. As of October 2021, the company's valuation is at around $3 billion.

Trung Nguyen is the CEO of the battling game company. He is a software engineer and has worked at the IT company Anduin Transaction. Nguyen was the co-founder and CTO of a social network for food bloggers called Lozi. He got the idea of the platform while playing Crypto Kitties.

Aleksander Larsen is the COO of Axie and Sky Mavis. Larsen is a former competitive gamer, having represented the Norwegian national team in Warcraft 3 and DotA. He is a business intelligence specialist and was a moderator at Crypto Kitties. Along with his ongoing role at Axie, Larsen is also a Secretary of the Board of Directors at the Blockchain Game Alliance.

Axie token crowdfunding took place on Binance Launchpad from November 3 to November 4, 2020. The raised amount from token sales was $2,970,000.

According to the set token economy, 100% of AXS tokens will enter into circulation by 2026.

How Does AXS Work

AXS is an ERC 20 token operating on Ethereum. The token holders can get staking rewards, play the game, and participate in key governance votes. The staking option was added on September 30, 2021.

Pets in the Axie Infinity ecosystem are NFTs corresponding to ERC 721 token standard. Their prices vary depending on the rarity and utility of an Axie.

The digital tokens, sold at the very first sale in 2018, are called Origins.  Their supply is limited to 4088, and only 30% of Origin Axies have a Mystic part, among them Mystic Axies.

You need to get three Axies from the marketplace to get started with the game. In so doing, users will need to connect their wallets and deposit funds via the platform's Ethereum bridge. It's also possible to trade NFTs outside the game on different marketplaces.

Each Axie is described by attributes - health, morale, skill, and speed. These qualities have their role in the future success of the game.

There are nine classes of Axies: reptile, bug, bird, nut, star, moon, plant, beast, and aquatic, but there are also three secret classes (Dawn, Dusk, and Mech). Each class has its pros and cons that make them more or less effective against other classes. Classes define the advantages of the energy cost, attack, and defense.

When a new pet is created, algorithms decide what qualities it will have.

To breed a new Axie, users need the in-game currency called SLP (Smooth Love Potion). The supply of SLP is unlimited, and it grows whenever new players join the game.  An online calculator and an in-game Axie mating hub are available to help players work out their chances of successfully breeding Axies with rare or powerful traits. The number of times an Axie can breed is limited to seven as a form of population control.

The Axie Word, built and managed by players, is called Lunacia. It's where fantasy creatures live. Lunacia is divided into separate lands in the form of tokenized plots. Players can upgrade plots using different resources that can be found in the game.

There are two gaming modes in Axie Infinity:

In this mode, players can form teams to battle monsters. This type of battle is called Player vs. Environment (PVE).

In this mode, battles take place between two players (PvP - Player vs. Player).

Gamers earn SLP as a reward for winning battles or completing tasks.

On April 28, due to concerns about congestion on the Ethereum network and fluctuating gas fees, the Axie Infinity team launched the Ethereum sidechain called Ronin. Ronin is designed to upgrade the game and improve the player experience by providing a cheaper, faster, seamless environment.

The scaling solution was designed by Sky Mavis, especially for the game. Ronin is connected to Ethereum via a two-way bridge and runs independently. The game combines the benefits of Ethereum with a customized system that suits its unique needs.

With the upgrade, Axie Infinity developers carried out the migration of assets over Ronin and redeployed smart contracts on the chain. Although Ronin will rely primarily on a dedicated platform-hosted wallet, the developers have stated that players can withdraw their tokens back to the Ethereum Mainnet.

How to Buy AXS

To purchase AXS, look for an exchange that supports both fiat and cryptocurrency to simplify buying. It's also important to take into account its security, payment methods, and gas fees.

Swapping AXS with other cryptocurrencies is available on many decentralized exchanges, including UniSwap.

Step 2: Deposit funds into your account. The next step will be depositing funds into the account. It's possible to buy AXS via a credit or a debit card, a bank transfer, or a crypto wallet.

Step 3: Buy Axie Infinity. Complete your Axie Infinity purchase. If you plan to keep your AXS for a considerable long time, you may want to store them in a wallet securely. Hardware wallets like Ledger Nano S and Ledger Nano X are the most popular options in this category. 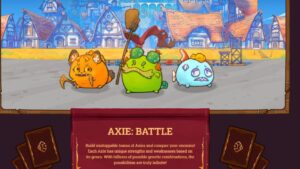